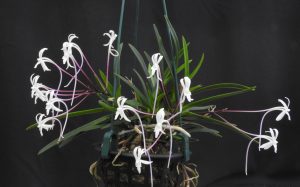 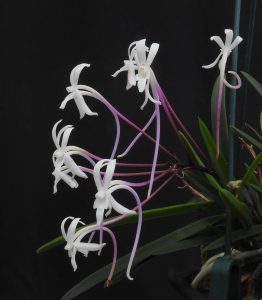 Earlier in the summer we featured the more usual white form of this small growing species but this week we have the treat of this form of the species with pink stems and spurs.

This is a cool growing orchid from Japan with very fragrant flowers and we grow our plants in Cool Asia in baskets where we keep them wet in the summer and damp in the winter. For us the species flowers from July right through to September.

The long spur holds the nectar and the flowers are pollinated by moths. With the flowers so fragrant we encourage students not only to breath on the plants but to have a good old sniff.