Growing Warm Orchids from the Americas

In this article I will look at our Warm Americas section, home to some of our most iconic orchids. On our six school expeditions to the Americas we have had a chance to explore warm lowland forests as well as cool montane forests. In particular we have explored the lowland forests of Belize and Guatemala as well as low elevations in the Mata Atlantica, Brazil.

In Guatemala we worked alongside the Private Natural Reserves of Guatemala to research the orchid species present in a new reserve surrounding Laguna Yaxha in the north east of the country. 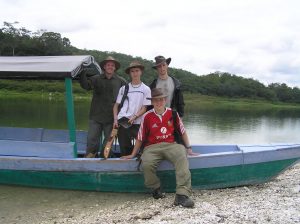 This area was once the centre of the Mayan Civilization which collapsed around 900AD and the lowland forest is full of Mayan Pyramids, many unexcavated, stone remains, and littered with pottery fragments. 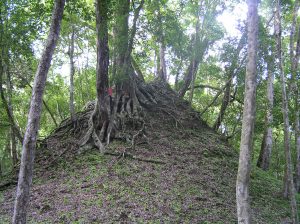 Orchid project students were tasked to produce a first field guide to orchid of the reserve, a challenge that they took on with relish.

Compared to the wet, evergreen mossy forests we had experienced in the cool montane forests of Brazil and Costa Rica the forest we found in Guatemala was open, bright, hot and comparatively dry. Epiphytes are were much more sparse this made the orchids present much easier to spot and identify. We found July day time temperatures in the 30s and night time temperatures in the high 20s. Climate data shows that the mean day temperature hovers at around 30C from March to October and is a few degrees cooler from November to February. Mean minimum temperatures vary from around 20C in the winter and 23 in the summer. Although the data shows the main rainfall period is from June to october with rainfall on twenty days each month we found that the sharp showers experienced most days were short lived and left a forests dry soon afterwards. 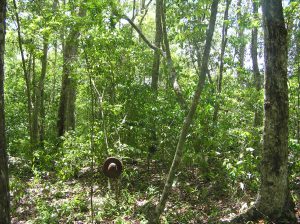 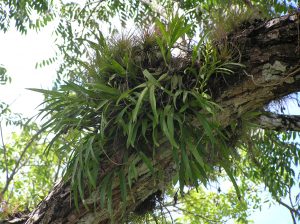 We were intrigued to understand how orchids could be so successful in such a challenging environment and identified a number of clues in the orchids we observed.

The first clue is the extensive root network developed by the orchids. One relatively small Prosthechea cochleata plant in flower had roots extending over 2m along its branch. This means that the plant can absorb considerable water from the heavy showers we experienced. A second observation was that many plants appeared to be of similar ages. A large number of Prosthechea radiata plants were seen all at first flowering with a second group perhaps five years older. We postulate that most years are not conducive to seedling survival but in the climatically good years a large number of seedlings flourish and establish themselves for long lives with little competition. 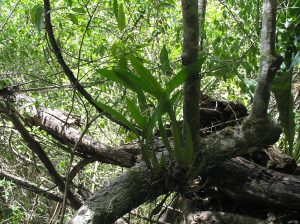 These observations support our experience in cultivation where  a number of the species observed in this fairly dry and harsh environment actually prefer to grow wetter and cooler than in their native Guatemala.

In Belize we observed a number of the same species flourishing in lowland forest and mangrove along the Belize River at 1m above sea level. The forest had very similar conditions to that in belize apart from the boggy ground (with tapir footprints) with Brassavola nodosa flourishing in exposed positions alongside Myrmecophylla tibicinis. 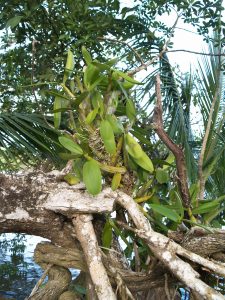 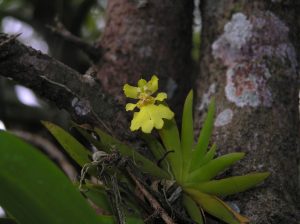 A key observation from the forests in Belize was the importance of microhabitat just as we have seen in all of our field studies. An excellent example is the hot growing Belize form of Pleurothallis grobyi which we only found growing amongst moss on fallen wood in deep shade. 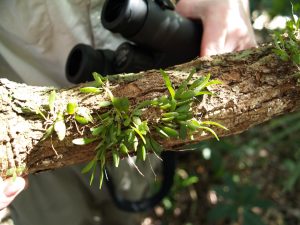 Similar observations were made in Brazil when visiting lower altitude orchid habitats nearer the coast than the cool cloud forests around Macae de Cima.

Leptotes bicolor is a species we have had at Writhlington since 1994 and it was fascinating to see it growing on a moss covered south facing cliff at 800m altitude where it would never experience direct sunlight. 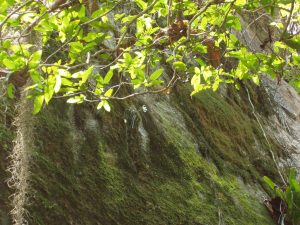 So let’s have a look at our cultivation regime for the warm growing species of the Americas at Writhlington. Our key themes are bright, warm and airy just like the forests we have visited. Shading consists of a single layer of autoshade net that deploys at 500W/m2 and as a result the section is our brightest. Light loving species are then hung high in the section in baskets. Example are cattleyas, Schomburgkias and Encyclias. Species that have thinner leaves and so appreciate a little more shade live under the plants in baskets and so have dappled shade. Examples are our prosthecheas, stanhopeas and oncidiums. 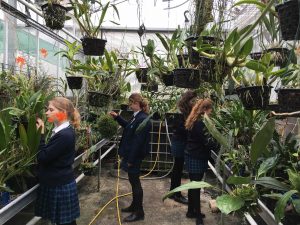 The deep shade specialists are then grown in darker corners and against the greenhouse’s north facing wall.

Our minimum temperature is 16C with the vents opening at 24C. This gives warm conditions for most of the year and in the summer our day time temperatures are around 30C with a maximum in the hot summer of 2018 of 35C. This is a reasonable approximation to conditions we found lowland forests although we grow species found up to altitudes around 1200m successfully.

I will look in details at a few of the plants in particular. We have a number of Prosthechea species and, as I have said, we have seen them growing in Guatemala, Belize and Costa Rica. We find these rewarding and straightforward plants to grow in baskets hung below the high light plants. Prosthecheas have thin roots compared to many warm orchid species but as we had noted in Guatemala they produce extensive root systems. We water our prosthecheas throughout the year and keep them wet in the summer when they are actively growing and dryer but not bone dry in the winter. It is not a surprise having seen their natural habitat that plants recent becoming very dry or remaining soggy. If a plant looks unhappy it is a good bet that the roots are in poor condition and it is time to divide the plant and let new plants develop healthy new roots in a fresh basket. 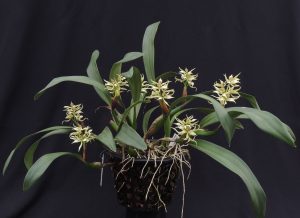 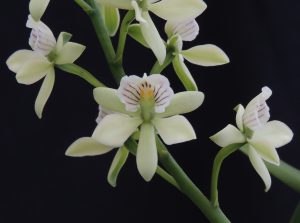 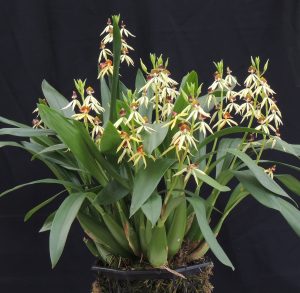 Photo 14 – Prosthechea cochleata is as variable in cultivation as we have seen it in the wild. We are very happy to have several clones and at least one is always in flower.

Myrmecophila tibicinis is a perfect representative of the dryer high light species that we grow high in the roof of the greenhouse. We find plants thrive on very good drainage and their baskets and also grow well mounted on a large cork mount. We spray plants daily but only soak them thoroughly in the summer ‘rainy’ season when actively growing. We have a number of clones with different shaped flowers and a range of colours that always demand attention when in flower. 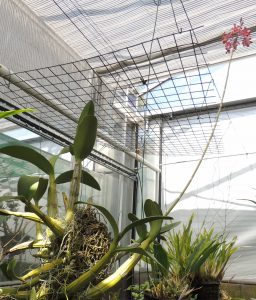 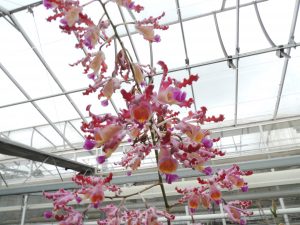 Brassavola species are well evolved for the harsh conditions experienced in lowland forests and in addition to Brassavola cucululata  and Brassavola nodosa we have seen in Central America we grow the Brazilian Brassavola tuberculata. We grow all our Brassavolas mounted on cork which we find has the advantage of maintaining root health much better than when grown in pots. Our largest plant has been on its mount since 2002 and looks as if it will be happy for many more years. The large flowers are moth pollinated and give a real wow in Warm Americas, a section packed with large flowered and impressive orchid species. 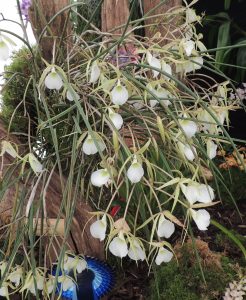