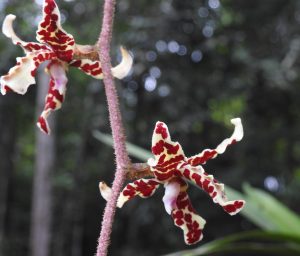 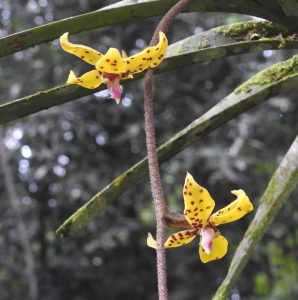 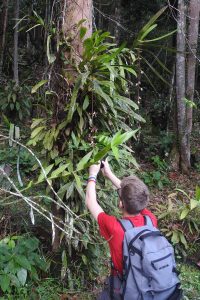 There was no question that today’s orchid of the day had to be Dimorphorchis lowii (Amalia’s favourite) This is a real orchid mystery as it is the only genus that produces two types of hermaphrodite (male and female combined) on a single spike. The top few flowers are yellow and rounded (two on this plant) while the lower flowers covering the long dangling spike (up to 3m long) are red and white and much finer. Even more surprisingly the top flowers are strongly fragrant and the lower ones aren’t. What is going on? The really exciting thing is that no one knowsas there is no good evidence of pollination biology. Are there two different pollinators? 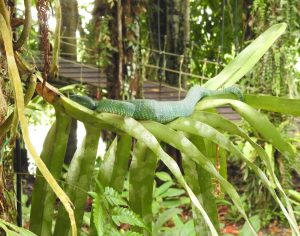 It is a really big growing orchid with thick leaves to 70cm long and thick pendulous stems up to 2m long. The flowers are very widely spaced on the long spikes. We have seen the plant flourishing in hot lowland forest low on trees with some shade.

Amalia is particularly excited to find that there is a second species, Dimorphorchis rossii which is smaller all round.

We will see if we can find this species again in the forest over the next two days.