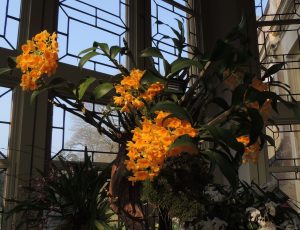 Todays orchid is one of the award winners from the Bournemouth show. Dendrobium densiflorum is a really spectacular orchid and with seven spikes looks a real picture. 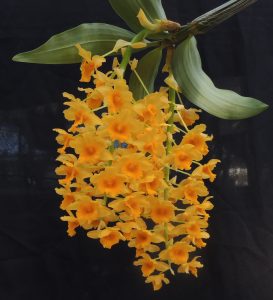 The flowering of Dendrobium densiflorum in the greenhouse is always a special event. This has to be one of the most dramatic we grow we have been fortunate to see it flowering its natural habitat too. In Sikkim the species grows at around 1000m where it lives as an epiphyte generally in tall semi-evergreen trees with little moss as shown below. The high end of its range overlaps the lower end of Dendrobium nobile’s range and we have seen both species flowering together during April just as they do in our greenhouse,

We grow out plants mounted with heavy watering in the summer. This is one of the plants that section hops in the greenhouse to replicate its natural habitat. In the summer it grows its new pseudobulbs rapidly and we find it a home in Warm Asia where heat and heavy watering help it to grow long bulbs. Its native Sikkim becomes quite cool at 1000m in winter and so we move it for a fairly dry rest in Coll Asia from November until March. We then move it back to warm where the change in climate induces rapid flower development.