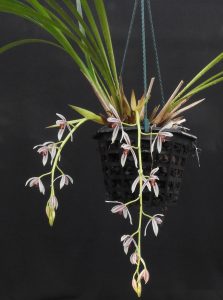 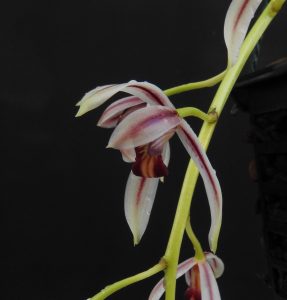 Are we able to see evolution in action in this species from the Himalayas and South east Asia?

Todays variety of Cymbidium dayanum is the one found in the Himalayas, through Southern China and Japan, with striking red and white flowers on pendulous spikes. It is a native of lowland forests where it is reported growing on trunks and lower branches of large trees in shade. We know this habitat well from our trips to Sikkim, Assam and Arunachal Pradesh where lowland forests are semi-evergreen, hot and wet in the summer but much dryer and significantly cooler in the winter. We recreate these conditions, growing plants in constant shade in our Warm Asia section. We keep plants watered throughout the year but much wetter in the summer. As you can see from the photographs taken yesterday evening, plants flower profusely and the flowers are long lasting and fragrant. 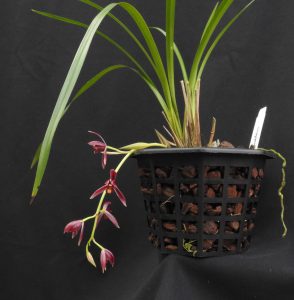 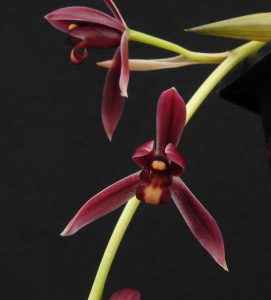 Although the different versions of the species show clear similarities the differences seem significant to my team of growers in Warm Americas:

While sitting every lunch time and pondering the possibilities of the two varieties of Cymbidium dayanum being or becoming two separate species with different pollination strategies, we would love the opportunity to observe the species in the field and test the hypothesis we have developed.

For those who are wondering, Cymbidium dayanum does not give any reward (such as nectar) to pollinators and is reliant on deceit pollination.