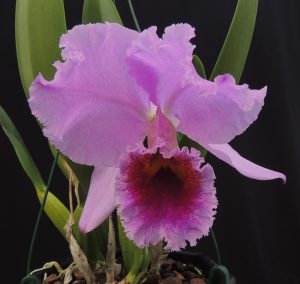 1107 days ago on 1st January 2017 we posted our first orchid of the day, and three years later we are finishing the year with the same species, Cattleya percevaliana. It is a special day as the first of the C. percivaliana seedlings we have been growing for eight years has flowered, and joins our adult plants.

Many of the uni-foliate (one leaved) Cattleya species look superficially similar but we find that one of the clearest distinctions is flowering time, and this species always flowers at the turning of the year. C. percivaliana is also identifiable by the single sheath, the short (15cm) flattened pseudobulbs, and by the unusual rather deep and circular markings on the lip.

Cattleya percivaliana is endemic to Venezuela where it is found as an epiphyte and on rocks from 1400-2000m altitude in good light. We grow the species in Warm Americas and hang plants in baskets above the door where plants produce copious roots that hang down from the basket.

The species looks as sumptuous today as it did on day 1 of 365 days of orchids. We hope you have a sumptuous New Year’s Eve to match.