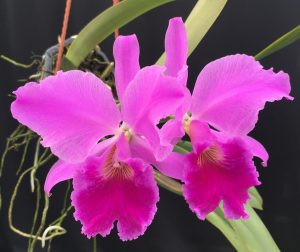 Today’s Cattleya is is native to northern Brazil and Venezuela where it grows in warm forest from 600-900m altitude. This is one of the unifoliate (one leaved) cattleyas from south America which has large pink flowers in common with other related species. Cattleya labiata was the first cattleya named (making it the type species) in 1818, which not surprisingly caused a real stir at the time.

An easy way to tell the related species apart is flowering time and this is an autumn flowerer from mature pseudobulbs.

We grow most of our cattleya species in baskets where they have excellent drainage and can produce masses of healthy roots. This plant is a first flowering seedling and has a rather attractive redish lip which is common in labiatas.

The species has been used extensively in breeding to create the variety of large flowered hybrids many of which (in my opinion) have lost the charm of the parent species which tend to have smaller, more open flowers that, like these two, look straight at you without the need for any staking or other support.