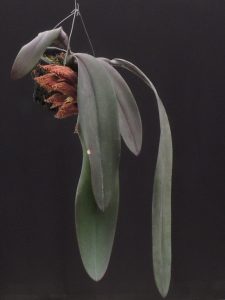 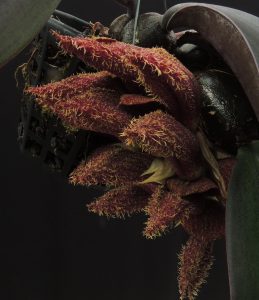 Bulbophyllum phalaenopsis is native to lowland forests in New Guinea where it grows as an epiphyte in deep shade. It has several remarkable characteristics including the enormous leaves. Our plant’s longest leaf measures 85cm long and at the base of each leaf is a stout compressed pseudobulb. The flowers are even stranger than the leaves and mimic meat to attract female carrion flies looking for a good spot to lay their eggs.It has been suggested that the yellow hairs on the red flowers mimic maggots crawling out of meat! – nice concept.

The flowers have a reputation as the smelliest of any orchid species and they do really stink. The flowers have a really foul smell of dead things but you have to get fairly close for it to become to much to bare. Perhaps we need to wait until the plant is a little larger and produces a number of spikes at the same time to really fill the greenhouse with the smell.

The flowers large red flowers do not open very far, presumably to make the pollinating flies force their way inside.

We grow the species in a basket hanging in Warm Asia (min 17C) and we water throughout the year. The plant has some shade all year which it seems to appreciate. We are hoping to bring the plant to the Devon Show on Saturday so why not come along and smell it for yourself – you have been warned!