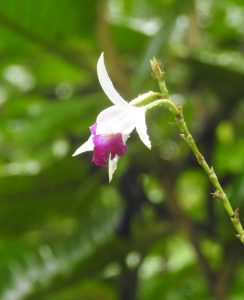 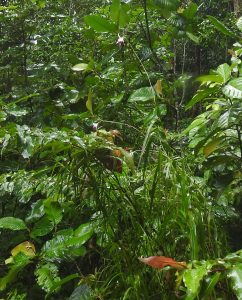 One of the orchids we found in the forest was this terrestrial species with tall (2 or 3m). This is a relatively common orchid from India right across South East Asia and we have seen it on roadsides in Sikkim and Arunachal Pradesh. In Sarawak it is used as a garden plant but the plants we saw yesterday are in their natural habitat – open areas at the forest edge – and were a particularly beautiful variety with white petals and a dark purple/pink lip. The more common varieties are pink.

In cultivation the plant likes it warm and bright which can be a challenge in the UK so it is more likely that you will see the species in tropical countries. In fact, this is one of the few orchid species which has become an alien weed species and is naturalised in much of the tropical Americas.