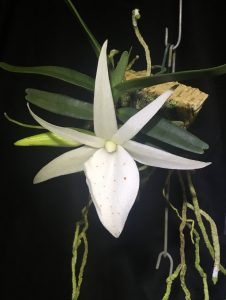 Last night I was in the greenhouse late at night and the air was filled with the scent of this little Madagascan orchid.

The name elephantinum means gigantic angraecum but it is actually one of our smallest Angraecum species.

This plant is flowering for the third time seven years out of flask and is just 6cm high and 8cm across. Of course it is the flower that is gigantic compared to the plant and it pretty much hides the whole plant. This year for the first time it has two flowers with the second bud close to opening behind the first flower.

This plant was one of the BOC babies given away in vitro at our last British Orchid Congress in October 2012 – this was one of the left over small ones – but well worth growing on. We mounted it on cork straight from the flask and it grows wet and bright so sprayed daily and near the top of a cool greenhouse. 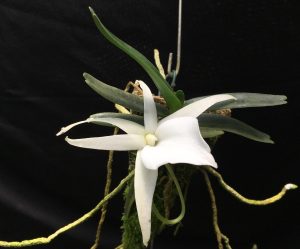