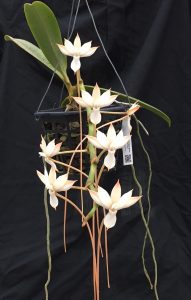 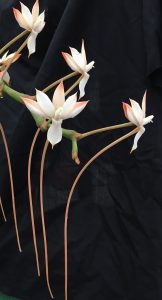 Today our thoughts have turned to Madagascar – an Island full of endemic species and some remarkable orchids. One of the species is this robust Aerangis species from Central and Eastern Madagascar with thick waxy flowers and a long spur. We grow the species hanging in the roof of Warm Asia although it’s natural habitat in woodland from 1100-1400m suggests it could grow cooler.

We spray the basket daily but this gives plenty of time for it to dry out between waterings.

Our plant is on its way to the Aardman Studios in Bristol this week where, as you probably know, our plants are featuring in filming for a new wildlife series. Up to know we have been focussing on South American Species for the show but now we are including Madagascan species for another episode. 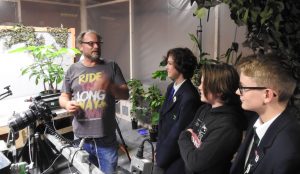 Students at a previous visit to the filming in Bristol

We are excited that one of our plants of Madagascar’s most famous orchid, Angraecum sesquipedale, is in bud and will be ready for filming just before Christmas. 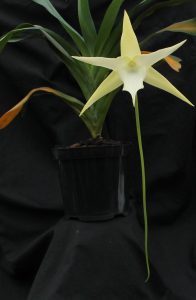