During our visit to the Penan tribe’s village, we had some fantastic fun shooting darts at a target using the traditional hunting weapon of a blow pipe.

The darts are traditionally dipped with poisonous latex from the tree Antiaris toxicaria, which can kill a human in a matter of minutes. Fortunately for us, the darts had not been dipped.

Great range can be achieved with a single powerful blow causing the dart to come out at great speed. We were then able to buy our own blowpipes from Henry’s father and uncle who also showed us how they were made. Watch out parents, lots of purchases were made. 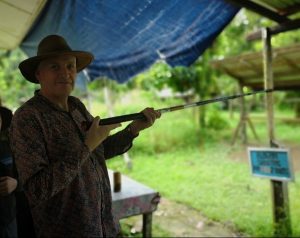