Following on from Heather’s fantastic post I thought it was time to write up my version. I left Writhlington a full year ago now to study a degree in Wildlife Conservation at the University of Kent. Whilst the course is a very general conservation based course, I  have been squeezing orchids into as many pieces of work as possible. I also travelled to Guayaquil, Ecuador last November to attend and speak at the World Orchid Conference, unfortunately my time that I missed at Uni I could not get officially written off as speaking at a conference is not a good enough reason to miss lectures, apparently. I have also been lucky enough to travel with project to Paris for the European Orchid Conference in March and to be another helping hand at the London show in April. Orchid shows are something I really don’t want to give up, and they really are something I can’t do as a member of the public too well. 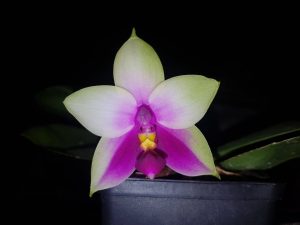 Phalaenopsis bellina, this is an excellent clone from breeding involving the noted ‘Red Apple’ clone 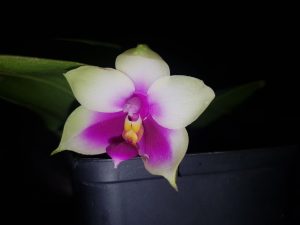 Phalaenopsis bellina, this clone is a meristem of the ‘Miki’ clone, unfortunately the flower is trapped under a leaf so it could be flatter and better presented

Despite moving between Canterbury and Writhlington a few times a year I have continued to keep a collection of orchids, which is now split into two between the two houses. My collection is still Primarily Phalaenopsis species, where I have had an excellent flowering of Phalaenopsis bellina this year, with a few novelty hybrids thrown in such as Phalaenopsis Samera, which is a primary hybrid between P. bellina and P. violacea which have both previously featured in 365 Days of Orchids and produces a nice compact plant with pretty, fragrant flowers. It’s a hybrid I am planning on remaking with two fantastic parent plants I have. 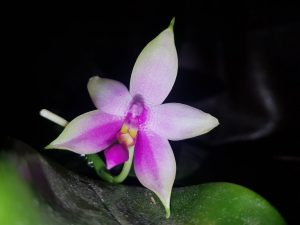 Bonus Orchid number 2 is a plant on a different scale, Grammatophyllum Jumbo Grand is another Primary Hybrid between G. martae and G. stapeliiflorum. My plant is carrying 73, 2 inch flowers (My dog managed to eat 2 buds) on spikes up to 5 feet in length. Despite my parents complaining we have managed to transport it across the country to Canterbury where it is only just tall enough to fit on the stand that I built around it over the summer. I managed to exhibit it at one of our local flower shows, the Timsbury Flower Show, where it won both it’s class and the trophy for the best orchid. 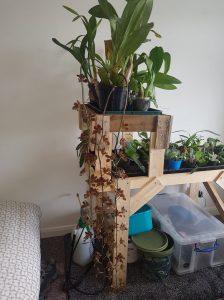 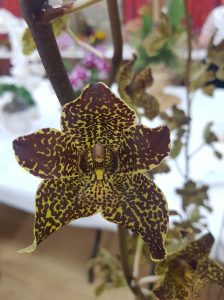 The Flower of Grammatophyllum Jumbo Grand