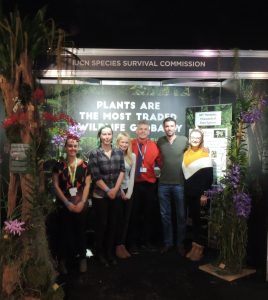 The UK Government’s conference on the Illegal Trade in Wildlife has begun and the stand for the IUCN Species Survival Commission is attracting massive interest. The stand is a collaboration between scientists from Oxford University, Lancaster University and students from Mendip Studio School (The Orchid Project)

The conference is attended by policy makers and ministers from countries across the globe and focuses on the threats to the worlds most iconic species from illegal trade, and measures to limit this threat. Our stand is focussed on alerting visitors to the threats that many plants face and our sustainably grown orchids and the stories they tell provide a context for this message.

Chloe and Jess designed the display and with a little help from the rest of the team have created the stand identified by many as the most creative, dramatic and arresting at the conference. 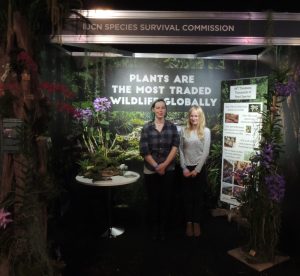 Orchid features include two species included on CITES appendix 1, Vanda coerulea and Renanthera imschootiana which regulars to our website will know well. Jacob Phelps (who leads the Tropical Environmental Change and Policy Lab at Lancaster University) is also delighted to have the diversity of orchids represented including miniature South East Asian species which despite their small size are also threatened by the trade in wild plants.

The stand also includes key data on the real and a serious threats experienced by a wide range of plant groups around the world.