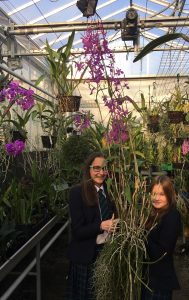 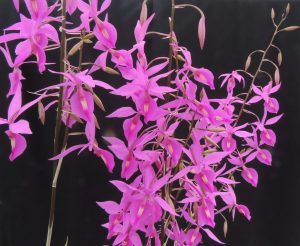 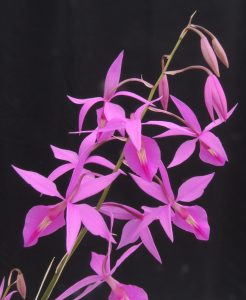 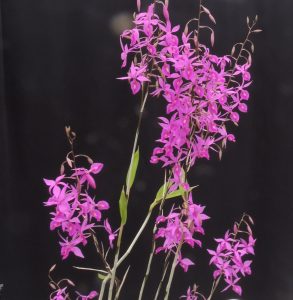 This plant arrived as a seedling twenty years ago and has grown into a terrific specimen needing both Amalia and Pip to carry it. The species is native to Mexico where it grows in open deciduous oak forrest. Each year long can like stems grow and produce spikes covered in glorious pink flowers and this year we have a better display than ever before.

We find that barkerias have to grow mounted as roots quickly rot when we pot them. The abundant roots seem to thrive when out in fresh air where they dry quickly after watering. We spray plants heavily during the summer when in active growth but reduce watering in the winter when the plants become semi-deciduous.

This plant has become a monster specimen and is rather difficult to keep tidy as it sprawls around a bit but the species has the great habit of flowering on very young plants and this first flowered two years out of flask with just two flowers.This year there are 237 flowers or buds and the stems often produce a second flush of flowers after the first flush finishes.