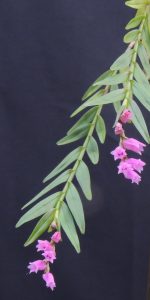 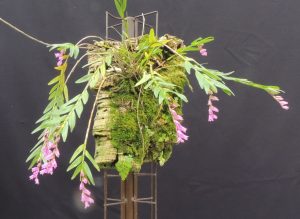 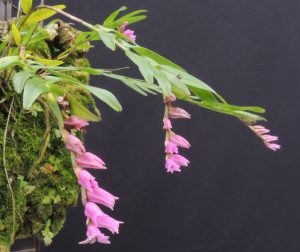 This remarkable orchid is one we have seen growing in hot dry rainforests in lowland Guatemala and in cool mountain forest in Brazil. The range of the species has actually been recorded from Mexico to Argentina and from 300-3900m altitude. Few orchids exist across such a range of habitats.

We first observed the species in Brazil where it was growing as a lithophyte on a South facing (Shady) rock face above primary forest at 1200m altitude. Plants were surrounded by moss and were growing cool damp and shaded. In Guatemala plants were growing as epiphytes low in trees (so again in shade) but the habitat was hot and seasonally dry. In Costa Rica we found the species thriving in mature regrowth forests at 1400m

When it comes to growing plants in cultivation it would seem difficult to identify the correct conditions but I expect plants would thrive in both our Cool Americas and Warm Americas sections. We know that our plant is seed from the Brazillian population as we purchased it in flask from Equatorial Plants and so we have opted for the cool damp shady habitat we observed there.

Plants flower once a year from the ends of this years growths and the long lasting flowers give a pretty display despite being small. The species is humming bird pollinated which explains the terminal pendulous nature of the plants.