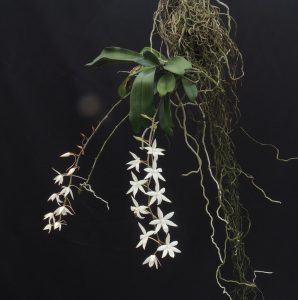 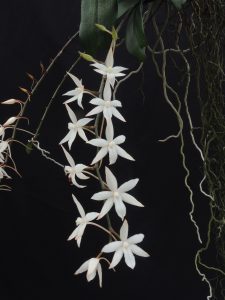 Our Aerangis species were much admired at the British Orchid Show and for good reason. They are compact plants that produce impressive flowers and look particularly arresting when grown mounted to show of the lovely roots and generally pendulous habit.

Aerangis biloba is the Aerangis we find the easiest to succeed with. It is a species from Central and West Africa where it grows in deep shade in woodland up to 700m altitude. The large leaves are a deep green again indicating a plant that enjoys low light levels. The name refers to the unequally bilobed leaves ( a character it actually shares with many Aerangis species).

We grow the species warm, shaded and watered throughout the year. We grow the species mounted to show off the pendulous flowers and to allow the extensive roots to hang freely. We know others who succeed with the species in pots but we find that it can suffer from rots on a crowded bench.

The flowers are a sparkling white with a tinge of salmon pink when first open. The flowers have relatively short spurs (just 3-4cm) that contain the nectar for pollinating moths and plants are very free flowering. We find that this species is easy to grow from seed and de-flasks well straight onto mounts. It has flowered for us just two years from de-flasking and even produces the occasional kiki (little plant) from its roots.