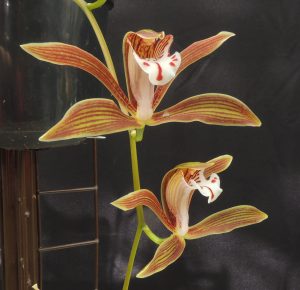 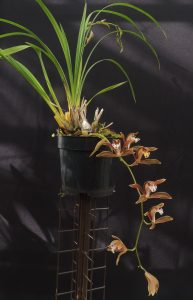 Autumn is here and our autumn flowering Himalayan Cymbidiums are coming into flower. The first is Cymbidium erythraeum and this is a smaller growing clone which we have grown from seed at Writhlington.

This Cymbidium is one of the many found in the Sikkim Himalaya and students on our school expeditions to Sikkim have seen this graceful species growing in large evergreen trees  at around 2000m altitude around Gangtok and in Southern Sikkim near Tinkitam.

Cymbidium erythraeum is a lovely orchid when not in flower due to its long thin dark green leaves. The flower spikes emerge in the autumn and the long lasting flowers are a treat throughout the winter. The spikes are generally arching or pendulous and this plant has one of each. We also have a taller growing, and later flowering, clone with much longer and more upright spikes but very similar flowers.

We grow this plant with other cymbidiums in a winter minimum of 6C and vents that open at 12C so it grows really cool. We keep it very wet in summer with plant food in most waterings. In the winter we keep it damp and never let it completely dry out. The evergreen forests we have seen the species in have large amounts of moss and abundant epiphytes indicating a very wet climate.

Don’t miss our display of fantastic Cymbidium species in the greenhouses during the British Orchid Show.