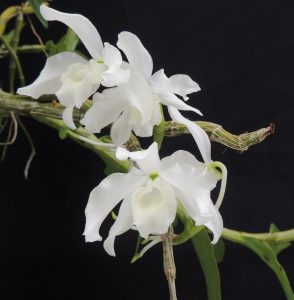 Dendrobium nolile is one of our favourite species and this week we have the pure white form in full flower. The more usual colour form is shown below.

The wild plants in Sikkim show a wide range of colour forms and one tree in particular demonstrated the variability of the species with dark forms, light forms, rounded flowers and more pointed flowers but we have yet to find the pure white var.virginalis. (see below) The tree also shows the habitat clearly with plants growing in dappled shade from tall trees and a little moss on the trunk showing that the dry season is far from bone dry here. In fact we found that it rains every few days in the dry season at this altitude 1200m. In cultivation we grow the species in Cool Asia with a minimum of 10C in winter and vents open above 17C. We keep the plants wet in summer and damp in winter, never allowing bulbs to shrivel.

One of our plants is a real specimen and flowered to its full potential in 2013 when it won a Cultural Certificate from the RHS and produced one of my favourite orchid project photos. The plant may be even better than this next year as it is full of flowering potential now that it has become settled in its larger basket.