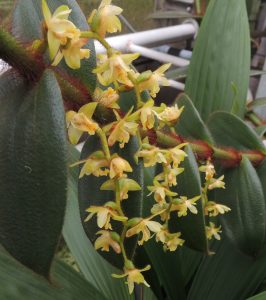 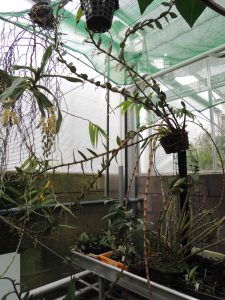 Our plant (above) now has ten older stems from 1.5-4m long and still growing as well as four new growths.

The species is also dramatically covered in ginger hairs. Unfortunately the dramatic flowering along all active stems only lasts about a week but is really spectacular when it happens – usually in mid summer.

As you can see from the photo we grow the species in a basket (or I should say ‘from’ a basket) that is tied to a metal frame for balance. The stems can then start by growing upwards and become pendulous over time without creating havoc in Warm Asia. Actually the paphs really seem to enjoy growing under its hairy stems (or tentacles). It hasn’t captured and devoured any year 7 students yet!