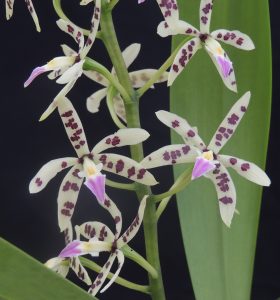 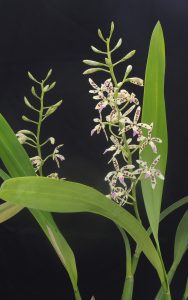 This wonderful species from Central America is a large growing member of the cattleya family that produces long spikes of dramatic flowers. The flowers are butterfly pollinated with the pink section of the lip the perfect shape for a large butterfly to grab hold of.

We have two varieties of the species; a smaller, wide flowered clone shown above that is spreading in its habit, and a larger flowered more upright clone with taller narrower flowers, shown below. 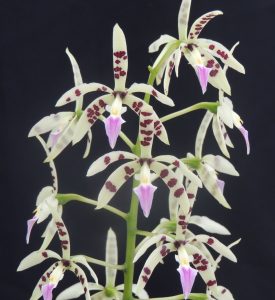 This clone that we have had since 1995 was until recently one very large specimen but is now split into about twenty strong divisions. Look out for it at the Malvern Show.

We have seen this species growing in Costa Rica where we found it in tall remnant trees on cloudy ridges at around 1500m. The trees had Masdevallia rolfeana growing on their trunks and, not surprisingly, we find that the two species do well close to each other in our Cool Americas section but with Prosthechea prismatocarpa growing a little brighter and dryer as it grows higher in the Coata Rican trees.