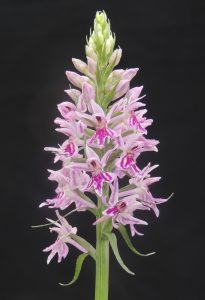 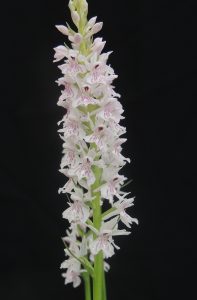 Dactylorhiza fuchsii is our native common spotted orchid and surely one of the most wonderfully variable orchid species you could come across. We have two of our seed raised clones in flower at the moment (above) which show the fantastic diversity in the species.

We grow plants in large pots of soil based compost in our temperate section and the seed is from the Mendips where the species is common in old quarries such as Asham Quarry where it prefers the poor soils in the old quarry workings and scraped areas where we saw it flowering today. (see below) 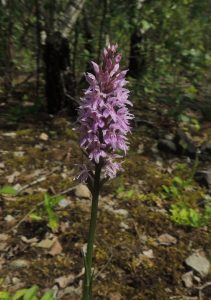 It is also common in remaining low nutrient unimproved limestone Mendip meadows and the nearby chalk downs of Wiltshire. It is even growing in the school car park where it grows in subsoil between the rows of cars.

Thanks to Agnes for finding a large population of bee orchids (Ophrys apifera) in Asham quarry too (photo below). The first flowers are just opening and the species will be at its best in a couple of weeks. Orchid project students will be heading out to find local native orchids over the next few weeks, 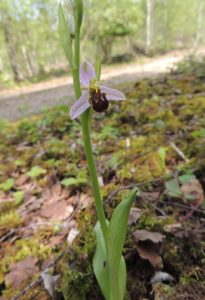 This bee orchid is flowering amongst the birch forest that has grown up in an area scraped clear of top soil ready for quarrying but never used.