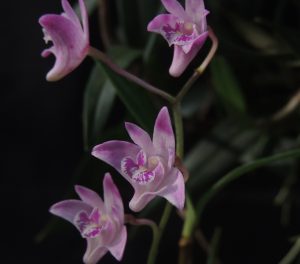 Todays fragrance in Cool Asia is the sweet and powerful scent of Dendrobium kingianum. This is a rewarding and undemanding species from Australia and several students have plants growing and flowering well on windowsills.

Our largest plant has been growing on its mount for at least fifteen years and provides a ready supply of small plants (keikis) that pot up for a great first orchid to new members of greenhouse club. 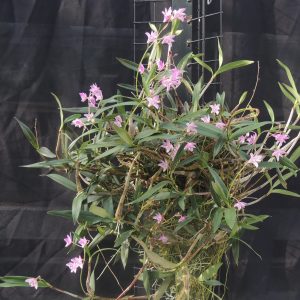 This species is another of the Australian dendrobiums found on the Queensland and New South Wales coast and mountains. It grows as a lithophyte earning it the common name of Pink Rock Orchid. The colour of the flowers varies greatly from dark pinks and purples through to white although there is a lot of confusion, in cultivation, between kingianum and the hybrids (such as Dendrobium x delicatum) that it forms with close relatives in the wild.

We grow the species both in Cool Asia (minimum 10C) and Temperate (minimum 5C) and it does well in both. We keep plants well watered in the summer and damp enough to stop shrivelling during the winter. We have also found this species very quick to flower from seed.