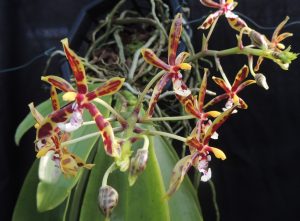 Our favourite Phalaenopsis species is back in flower. Phalaenopsis manii is a species we have met in lowland forest on several of our trips to the Himalayas.  The best plant we have seen was growing in Nameri National Park, one of Assam’s fantastic Tiger reserves. (see photo below) 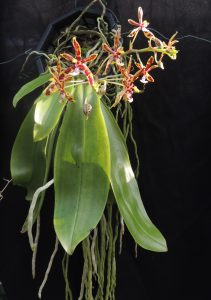 It is also noticeable that in common with most Phalaenopsis species P. mannii has a pendulous habit which will prevent water resting in new leaves and causing rots. We grow our school plant in a pendulous way by letting it lean out of its basket. It clearly loves to grow like this and is now starting to form a clump a little similar to the wonderful specimen in Assam (by the way I am happy to talk to people interested in travelling to this fascinating region)