Planning the Gongora display at the Bristol Aquarium 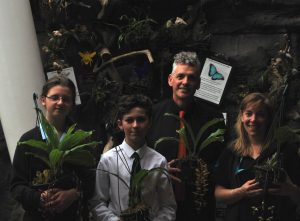 We have had a very successful day working with Wendy to plan the next orchid display for the Bristol Aquarium. The photo shows Tallis, Otto, Simon and Wendy with some Gongora species we took along to help us decide on planting options. 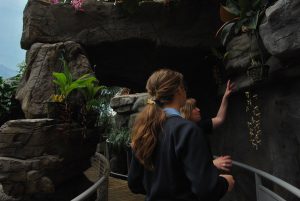 Our plan is to plant a ‘Gongora Forest’ along the pathway as you come into the Orchid area. At the moment it is mostly just bare rock and so it will be transformed with the planting. We also want to include lots of interesting and engaging interpretation so watch this space to see what our team comes up with.

We also had a chance to plan some of the other permanent displays including the ‘Islands Display’ focussed on endangered species and a Cretaceous Orchids component for the dinosaur exhibit – The first orchids appear to have evolved about 80 million years and so were admired by Dinosaurs – no evidence has yet been found of Dinosaurs collecting orchids and making displays of them but of course the fossil record is very incomplete!