A busy week ahead for orchid project students as we prepare to host the Tropical Rain Forest Biome Team from Eden on Friday. We are planning a day of learning workshops run by students – watch this space for more details.

It is now October and so there are just three months left for our 365 Days of orchids challenge and so far, so good – lets see if we can keep up with a new in flower every day until December 31st. 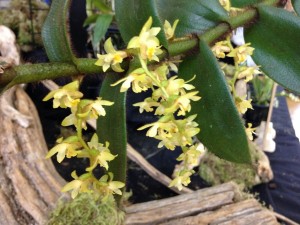 Our rule of one orchid a day that must be in flower has resulted in us missing some spectacular orchids which have flowered when there are lots of other species coming into flower and I see we have missed one of our largest and most dramatic orchids. Trichotosia ferox is a very large growing species from Malaysia (Previously called Eria ferox) from lowland forest that grows long stems several metres long that keep growing and flowering for several years. The species is also dramatically covered in ginger hairs. Unfortunately the dramatic flowering along all active stems only lasts about a week and this year we missed photographing it so the photo above is from 2015 when it won Best in Show at the Devon Orchid Show.