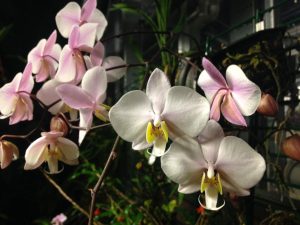 Jacob here. Phalaenopsis philippinensis is a species endemic to the island of Luzon in the Philippines where it is found as a small epiphyte at around 1200 metres altitude. The species exhibits dark mottled leaves which are likely to act to block out sunlight which enables the species to colonise more areas of its native forests. This species has been wrongly identified as Phal. Schilleriana in our greenhouses until its most recent flowers opened on Tuesday.

It also has the nice habit of branched spikes with flowers that all open at the same time. It comes in variations of white, cream and light pink. Like many of the Phalaenopsis species from the Philippines this orchid is a deceit pollinator, offers no reward to a pollinator, and so need to have long lasting flowers if it is to wait for a naive  insect that hasn’t worked out that these flowers are of no use to it.