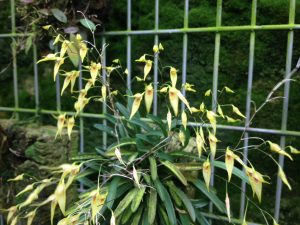 Pleurothallis grobyi is both one of the most enchanting and one of the most confusing little orchids we have come across. The photo here shows a yellow form which is flowering at the moment and has longer thinner leaves. This form originates from Ecuador but the species is recorded from as far North as Mexico and as far south as Peru and Brazil. We have seen different form of the species in Brazil, Belize and Guatemala and have found them in mountain cloud forest and hot lowland forest so this is either an incredibly widely distributed and variable species or possibly several distinct species that are currently lumped together.

This delightful orchid was growing in cloud forest near a ridge at 1300m. Notice the much rounder leaves than the plant from Ecuador. It is also interesting to note what great roots this plant has – a common feature in epiphytes in the wild is much better roots than we manage to grow in cultivation and also an explanation of how the plants get sufficient water from dew and mists in the dry season.

In Belize and Guatemala we came across another form (shown below) which lives in hot dry lowland forest but we found was restricted to living in the moss layer on decaying wood.

All the plants we found had these lovely white and pink flowers.

Which ever the variety we recommend Pleurothallis grobyi as a lovely orchid to grow.

p.s. any thoughts on the species very welcome.