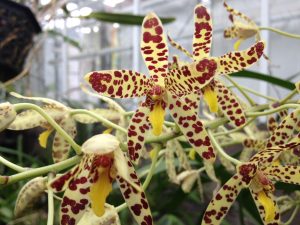 Easily one of our most spectacular plants is Ansellia africana – the Leopard Orchid. We have seen this species growing in costal rainforest near Durban in South Africa and it is found right across the tropical part of the continent.

The forest we found it in in South Africa was open and experienced a seasonal dry season in the winter giving a clue to the correct cultivation of the species which is to grow it in good light with a wet summer when it is in rapid growth (plenty of feed too) and then a dryer winter rest when it flowers but does not grow.

The plant pictured is the clone ‘Writhlington’ which won a Cultural Certificate from the RHS in 2016 and which we grew from seed in our laboratory. The seed was sown in 2004 and the plant was sold at the Eden Project in-vitro in October 2006. It then spent nine happy years with its owners in Cornwall before outgrowing the available space. It was donated back to Writhlington where it is clearly delighted to be home and it fills Warm Americas with its lovely spotted flowers during February, March and April. 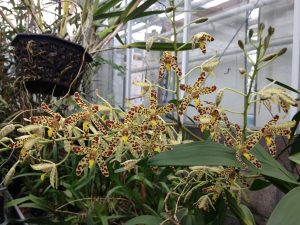 The plant is huge with 1m long pseudobulbs which produce 70cm branched spikes and hundreds of flowers. We have never seen a clone as good as this one which was a cross between the dark form of the species and a lighter spotted one and it may be a chance tetraploid as it refuses to set seed. We have marked it out as a plant to meristem. If you want to see it in all its glory then do come the the London Orchid Show at the RHS halls Westminster on March 29th and 30th. Ansellia africana should then be at its peak.