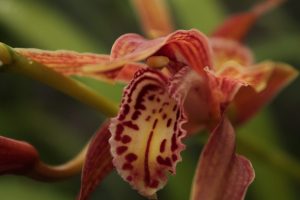 This species is the third Cymbidium from Sikkim to feature in 365 days of orchids. It is a large growing plant with flowers much smaller than Cymbidium hookerianum and lacking the delicate elegance of Cymbidium erythraeum but its flowers are remarkable for their distinctly red colouring and this species has been used in breeding to give red flowered hybrids. It is a variable species and many plants have a more yellow/brown base colour to the flowers but our clone has a much lighter ground under the red striping which gives a dramatic effect. The flowers do not open fully but we like the way that the flowers conceal such a lovely lip which is long, curved and wonderfully striped and spotted (well done Joe for taking such a great photo).

The natural range of the species is India (Sikkim, Arunachal Pradesh, Assam, Meghalaya) Nepal, Bhutan, Burma and China) and it is reported as growing at lower altitudes than Cymbidium hookerianum although we grow it it the same section (temperate) with a minimum 6C. We are pretty sure we have seen the two species growing together in forest near Labrang Monestry and the ruined Palace of Ongditse where Joseph Hooker was imprisoned for a while on his epic botanical exploration of Sikkim in the 1840s.