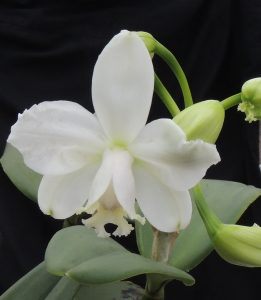 We haven’t had snow this week but how is this for a white Christmas?

Cattleya loddigesii is a bifoliate (two leaved) cattleya species from Brazil. The species grows near the Atlantic coast of Brail from 600-900m and was once common in the swampy forests along the regions rivers including the Rio Grande, Rio Tiete, Rio Pardo.

Loddigesii var.alba is a robust plant with cylindrical pseudobulbs 40cm high that produces a strong flower spike between the two thick leaves with around six large waxy flowers.

We find the species thrives in a basket hanging in the roof of Warm Americas where it gets lots of light and dries out between watering.