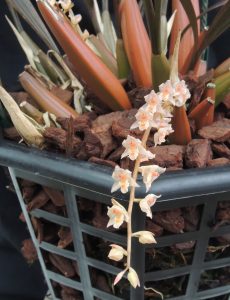 Researching 365 days of orchids has thrown up a few surprises and one has been this species. We have come across several Pholidota species (that are closely related to Coelogyne) in Loas, Sikkim and Arunachal Pradesh. Some species are small and attractive, others are large and straggly but all have been cool growing. As a result we have had Pholidota leveilleana growing in our Cool Asia section since we purchased it about five years ago. The plant has gown but not really flourished and this is not surprising as this species is actually a warmer growing lithophyte. The plant is native to Southern China and Vietnam where it grown on mossy rocks in deep shade from 800 to 1800m.

We have moved the plant to Warm Asia and it has responded with a flush of its small salmon/cream flowers. 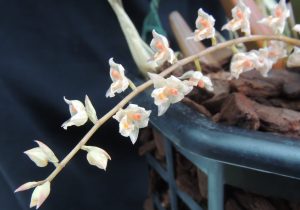 Growing the plant cool and bright has produced red leaves and bulbs so it will be interesting to see how it does when it has spent a few year shady and warm.

We move our orchids around the greenhouses quite a bit. This is either because we are looking for a spot with the right conditions or giving a plant a seasonal rest. For example, we have been moving several of our Himalayan dendrobiums from Warm Asia to Cool Asia or Cool Americas for the winter. Cool Asia is a little too cool (minimum 10) for the warmer growing species (such as D. thyrsiflorum) and so the roof of Cool Americas (min 12C) is just right. As a general guide, the further a plant lives from the equator the greater the difference between summer and winter temperatures.