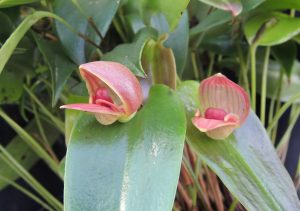 We have one of our favourite Pleurothallis species today, and another species that arrived with us as an unexpected ‘weed’ on a different plant. We were given our first plant of Octomeria grandiflora (day 317) in 1999 and soon noticed some very small leaves near its base that were the ‘wrong’  shape. These developed into the characteristic elongated heart shaped leaves of Pleurothallis palliolata and eventually the large flowers settled the matter – we think the flowers look like lizard heads!

The species propagates freely by keikis ontop of the older leaves and we now have a large number of small plants from the original as well as a second clone (shown here) donated by Liz and Tony Taylor. Liz and Tony generously donated a number of Pleurothallis species and caused great excitement amongst the students responsible for Cool Americas as they recorded the new additions to their collection and set about dividing and propagating the plants.

Pleurothallis palliolata is native to cool mountain forests in Costa Rica and Panama. We have seen closely related species growing in wet evergreen forest at 1400m on the Poas volcano in deep shade. We grow the species successfully both mounted and in pots.