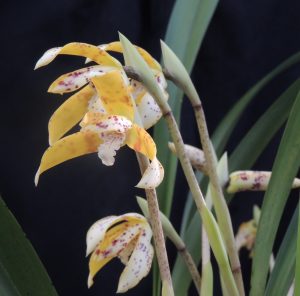 This morning the greenhouse was filled with scent and a little sniffing about soon identified Maxillaria picta as the source. This was very reminiscent of the first time we found the species in Brazil. In April 2000 a group of students and I were walking through regrowth forest at around 1200m and were stopped in our tracks by a powerful honey sweet scent filling the air around us. Nearby we found the remains of an ancient fallen tree and a plant of Maxillaria picta at least 1.5m across still growing where it had fallen (photo below) 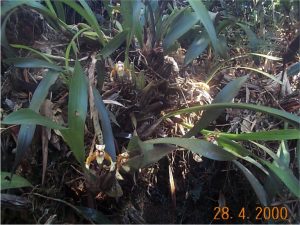 Presumably the plant had survived the fire that had swept through this patch of forest about thirty years ago and carried on growing on its now dead tree which has since fallen. The regrowth forest still lets plenty of light down to ground level and so the plant is growing and flowering happily.

Our plant at school is rather neater than the ancient Brazilian plant and is producing around six to eight flowers per bulb. We are looking forward to the day that this plant is 1.5m across. 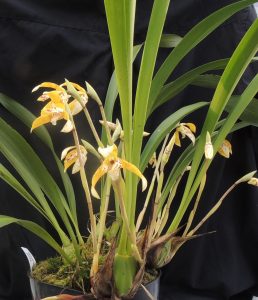 We grow the plant in Cool Americas and water it throughout the year. The moss that has grown on the top of the pot shows just how wet we keep it in the summer.