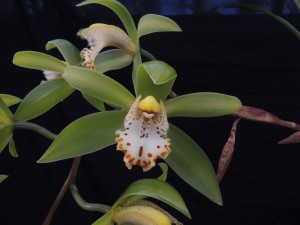 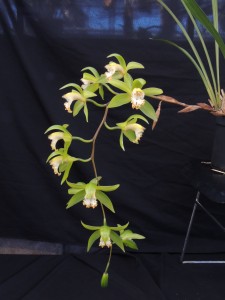 Hello, today’s orchid is the Cymbidium hookerianum. It is a Himilayan mountain orchid that we keep in temperate because it likes it really cool to replicate its Sikkim home. Although we have had this orchid for 10 years, it has only recently flowered for the first time!

Tabby says, “I think it is a very beautiful orchid because of the lovely contrast between white and yellow and the pretty texture of the lip.” We all agree that this is a really spectacular orchid.

We have found that the secret to flowering the species (we have two different clones flowering today) is to look closely at the conditions it enjoys in its natural habitat. In our many trips to Sikkim (2005, 2009, 2010 and 2012) we have seen lots of plants of Cymbidium hookerianum growing in forest from around 1600m to 2500m, and growing on trees in evergreen cool tropical forest, but most plants have been non flowering with no evidence of old flower spikes. However the plants on old dead trees have been flowering heavily and carrying large numbers of large seed pods.

This evidence suggests that to flower well this species enjoys the extra nutrient that becomes available when the tree that supports it starts to rot. We therefore now give our plants additional plant food during the growing season and we have been rewarded with flowers. We also now grow this plant in our temperate section with a winter minimum of just 5C and the plants clearly love the cool conditions.