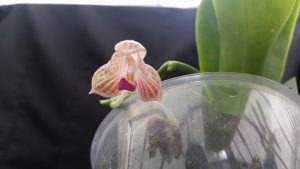 This species was once native to the island of Java and was found as a small, warm growing epiphyte. It produces small cup shaped flowers primarily during the spring but will produce odd flowers throughout the summer. the flower spikes are shorter than the leaves and grow with a pendulous habit.  The species was declared extinct in the wild during the 1970’s as the last plants were stripped from a tree on a plantation. It is a little grown species in cultivation and has only be used as a parent in a relative few first generation Phalaenopsis hybrids.