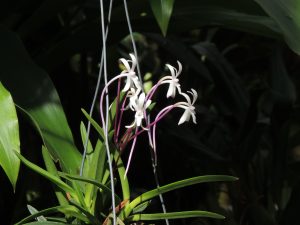 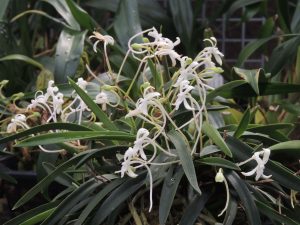 Ruby here with my first post. Vanda falcata is an orchid from Japan with very fragrant flowers. We grow it in cool Asia in baskets.

I have done research and found that this species has been grown in Japan for a very long time. Vanda falcata, often called Fūki-ran or ‘orchid of the rich and noble people’ because in Japan 400 years ago, only the rich and noble could afford to own the orchid. They were so prized that they would be covered with a gold or silver net to protect them and to admire the plant, people had to cover their mouths so they would not breathe on it.

There are many different forms of this orchid, including changes on colour, size, shape and even leaf texture. We have two types, one all white which is the normal variety and one with a white flower and a red-pink stem and spur.