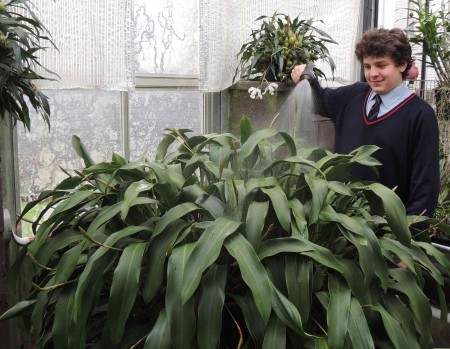 The UK’s top award for any orchid grower is the Royal Horticultural Society ’s Orchid Trophy.  The award is given each January to the grower of the most finely grown orchid plant seen by judges during the previous year and the 2013 trophy has been awarded to Writhlington for our Coelogyne holochila shown at the London International Orchid Show last March.

Credit has to go to Jacob Coles who succeeded in getting the plant into perfect condition for the show while many of the Orchid Project were in Sikkim last Easter. Jacob describes the plant as “A real specimen. It has been growing at Writhlington since 1993 and it is now enormous with one hundred and eighty-three flowers open when it flowered last spring.”

Jacob will collect his trophy at the Royal Horticultural Society Awards Ceremony in Westminster and the plant will be flowering again in time for Writhlington’s next orchid open evening on March 6th from 5pm until 9pm.

The plant is looking even better this year (see Jacob watering it above) but may now be too big to fit in a van and get to a show!