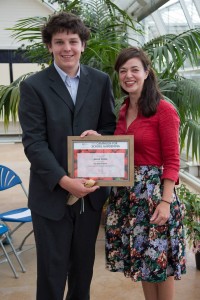 Back in May I was awarded a place in the RHS Young Gardener of the Year finals and was awarded a video camera to create a film to be judged in the second round. The films were sent off and we sat back waiting for the results. We recieved the news a month or so back now that I had won the key stage 4 section and was invited, along with all of the other finalists and winners, to the awards ceremony at RHS Wisley. During the ceremony the awards were presented by TV gardener Frances Tophill. Additionally we were given a guided tour of the gardens and glasshouses from the curator, Colin Crosbie. The video we produced for the competition has been put onto the RHS Campaign for School Gardening’s YouTube channel.