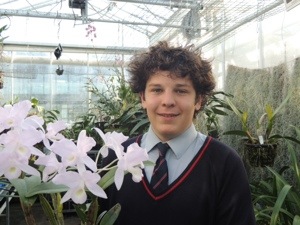 The Writhlington Orchid Projects top grower, Jacob Coles, has reached the finals of Young Gardener of the Year. The competition is organised each year by the Royal Horticultural Society and Jacob is joined in the finals by twelve other top young gardeners from across the UK.
Jacob has been awarded a video camera as a prize and will be using this over the next two weeks to make a film about his gardening which will be featured on the RHS website.
The winner will be announced on the 20th of June.